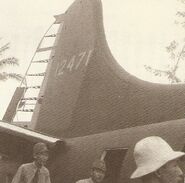 Captured and repaired by the Japanese, the aircraft was used for training to develop fighter tactics against USAAF B-17s being used in the Pacific. Eventual fate of this aircraft is unknown,[1] although it is believed to have been scrapped, along with the other two B-17s captured by the Japanese, before the end of the war.