TAIC 6 as it looked when found

Equipped with H-6 radar, this B5N2 Type 97 Carrier Attack Bomber was built in December 1943. The 'Kate' had been attached to the General (Combined) Escort Force or Rengo Goei Butai (GEB), serving there with the 931st Kaigun Kokutai.[1]

After the capture of Saipan in June 1944 this B5N2 Kate, with the tail-code KEB-306, was found abandoned at Aslito airfield.[2] The aircraft then was shipped to the USA by TAIU-POA aboard the escort carrier USS Copahee (CVE-12), which left the Garapan anchorage off Saipan on 8 July 1944, and unloaded its cargo of fourteen Japanese aircraft and thirty-seven engines at NAS North Island, San Diego, on 28 July 1944 (the other aircraft were thirteen 'Zekes', in various states of disrepair). The aircraft were then taken to NAS Anacostia, where a number were restored to flying condition by the Technical Air Intelligence Center, amongst them the B5N 'Kate'. It was made airworthy again. First flight, after overhaul, on 16 November 1944. Initially it was used to evaluate the effectiveness of the radar equipment against US naval vessels off the Delaware coast, with the equipment being operated by the Naval Radio Laboratory. To the Tactical Test Division, NAS Patuxent River, Maryland 13 December 1944. From there to the Technical Air Intelligence Center (TAIC), NAS Anacostia, Maryland on 27 April 1945, as TAIC 6. In October 1945 the Kate and a Zeke were attached to a group known as ‘The Navy’s Flying Might’ at NAS Wildwood, Rio Grande, NJ, set up as a travelling display to take part in nationwide Victory Loan promotions across the USA. Believed to have been on static display at the World's Fair of Aviation, Offutt Field, Fort Crook, Omaha, Nebraska in July 1946.[3]

Upon discovery by US forces

TAIC 6, being restored to flying status 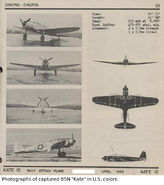 A page from the TAIC recognition manual

US personnel pushing the plane in the hangar

Back in Japanese markings for recognition purposes

After testing was completed, the aircraft was scrapped sometime in 1946.[4]