This aircraft may have belonged at one time to the 3rd Hikotai (Squadron) of the 582nd Kokutai (Group), 25th Koku Sentai (Air Flotilla) based on Rabaul during 1943. It was flown to Bougainville and seriously damaged in the bombing which accompanied the Allied landings in November of that year. It was then hidden at the Kara airstrip for eighteen months, until a decision was made to return it to airworthy condition as a morale-boosting exercise for the 60-to-70 men of Japanese personnel in the area. This was achieved quite quickly, helped by the presence of other damaged aircraft which provided a ready source of parts. Rumours of the Zero's existence had come to the attention of Royal New Zealand Air Force (RNZAF) intelligence officers, and Kara airstrip was visited by personnel from the RNZAF base at Piva on 14 September. The Japanese ran-up the engine for the New Zealanders, who satisfied themselves that the aircraft was airworthy, but had it been left up to the authorities, the Zero would have been abandoned to rot at Kara.[1]

On the morning of 15 September 1945 Wg/Cdr W.R. (Bill) Kofoed and Eng/O C.D. Kingsford flew to Kara in a Wirraway of 5 Sqn RAAF. Kofoed and Kingsford inspected the aircraft. The repairs had been well done and all equipment appeared well-made and serviceable. Kofoed decided to fly the Zero to Piva. He took off and made the 32-minute flight north-west to Piva without incident, but with undercarriage locked down for the entire flight. Most of the RNZAF personnel at Piva had not seen any Japanese aircraft, even at a distance, so the Zero was the center of considerable interest on its arrival. One of the first to try the cockpit for size was Air Commodore G.N. (later Sir Geoffrey) Roberts, Commander of the New Zealand Air Task Force in the Solomons. Subsequently the General Manager of Tasman Empire Airways Ltd from 1946 he is regarded as the "Father of Air New Zealand". He recalled later: "Kofoed had to be 'matted' for disobeying orders but with that formality over, I took him to my quarters, gave him a couple of whiskies and congratulated him for being so bloody stupid".[1]

Although its engine was run-up several times the "Zeke-22" was not flown again while at Piva. During October 1945, the Zero was partially disassembled and transported to Torokina and loaded as cargo aboard the inter-island ferry steamer "Wahine", which was chartered to repatriate RNZAF personnel from the Pacific and made three return trips. The Zero was transported to New Zealand on the second of these, which left Bougainville on 15 October 1945, and it still wore the white surrender scheme, with green crosses above and below the main planes, and on the fuselage sides. The "Wahine" arrived in Auckland on Saturday 20 October 1945 after which the Zero was unloaded and taken by barge to RNZAF Station Hobsonville, on the upper reaches of the Waiteata Harbor., where it was assigned the RNZAF serial number NZ6000.[2] The Zero was flown once, during December 1945, by Wg/Cdr Willis (CO of Hobsonville) for a ten minute flight, reporting: "the aircraft was quite pleasant to fly, being rather like a Harvard. It appeared to have no unusual traits in the ten minutes I was flying."[3][4]

The RNZAF planned to flight test it further, or to donate it to an aviation school as a training aid, but both plans never materialized. Officially grounded in May 1946, the Zero was assigned serial numbers INST.113, the engine INST.BI72, for use as a training aid and was transferred to Technical Training School at Hobsonville on 28 February 1947.

Never used, it was offered to the Auckland War Memorial Museum in September 1947, but remained in RNZAF possession until a display space was available at the museum. The Zero remained in storage and was only occasionally displayed thought the 1950's as the Easter Show at Hobsonville in 1954 and 1957, and parked outdoors with other old and surplus aircraft. Afterwards, the Zero was stored at Ardmore Airfield in No. 8 hangar, partly dismantled. In 1958 the RNZAF attempted to reassemble the Zero and repainted it for display at events celebrating the 21st Anniversary of the RNZAF. Afterwards it was stored at Ohakea Airfield and from 30 November 1959 at Whenuapai Airfield, where it remained prior to donation.[5] 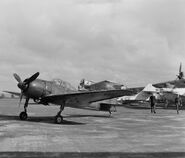 Auckland
Add a photo to this gallery

During December 1959, this aircraft was delivered to Auckland War Memorial Museum and reassembled by RNZAF personnel. During 1985, the Zero was dismantled for study by RAAF restorers F/Lts Scholz and Doggett, who were also involved with the restoration of another Zero, A6M2 C/n 5784. They confirmed components from several Zeros were used to repair this aircraft. In summary, we have a composite airframe. Minor componentry identified as coming from other airframes Flight Lieutenant Scholz and Flight Sergeant Doggett are:

Later, Andrew Wilkins and Peter Lewis made a further examination of the Zero. They noted, that the front section of the Zero is from A6M3 Zero Model 22 3835, and the rear half -with the data palate- from a similar Model 22 c/n 3844.[6][7][8] In 1995 the Zero underwent extensive restoration at the museum, and today is displayed in at the "Scars on the Heart" exhibit, which opened in 1997.

The book
Add a photo to this gallery

Retrieved from "https://captured-wings.wikia.org/wiki/C/n_3844?oldid=7316"
Community content is available under CC-BY-SA unless otherwise noted.