Built as one of the 100 Stirlings from the N3635-N3769 batch,[2] and operated by 7 Squadron RAF with fuselage codes MG-F, N3705 was captured on 16 August 1942 - while overflying The Netherlands by night, the crew[N 1] encountered problems, and the captain elected to make an emergency landing. N3705 eventually came to rest in an open field[4] at Gorinchem, Netherlands. Believed to have been written off as damaged beyond repair, the aircraft was salvaged by the Germans after the emergency landing, and flown in Luftwaffe markings[5] for testing[6] by Erprobungsstelle Rechlin as aircraft 6+8

The aircraft was photographed, in colour, by the German propaganda magazine Signal when its flying days were over. Three of the engines had been removed, and it appeared to be in the far corner of Rechlin, having suffered another crash landing,[7] and was presumably scrapped. 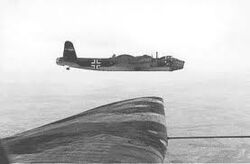